The Spectacular Past You can see on Route 66

The most beautiful and scenic highway in America has been historic route 66 built beginning in 1926. This is the path many have taken from Chicago heading west until they end up at the Pacific Ocean in Santa Monica, California.

Travelers on this way west will visit 8 states and cover 2,448 miles until 1985 when the government decide to realign the highway and replaced it with interstates in some section. It is still possible to travel this route by following ‘Historic Route 66” as it is listed as a National Scenic Byway in Illinois, Missouri, New Mexico, and Arizona.

For RV travelers who wish to escape to the past, Historic Route 66 has what you have been looking for. Many of the towns and villages along the old route are still maintaining their appearance of terms as if it were 50 to 70 years ago. This includes drive-in restaurants and theaters, motels and service stations along with souvenir shops to help support travelers. 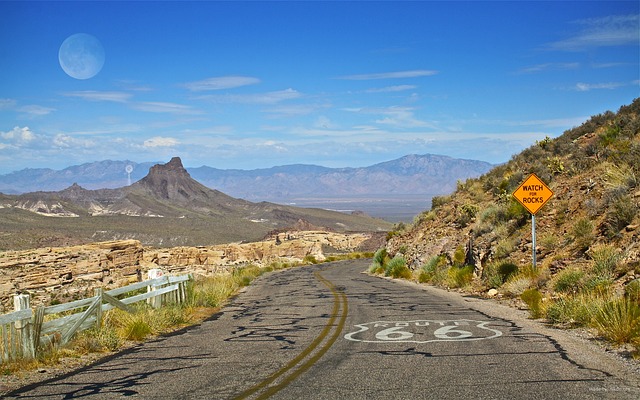 The first part of the journey through Illinois is heading southwest crossing the corn covered plains. Today this is Route 126 in some parts and I-55 in others. Most of the towns are small farming communities with good food and friendly people like Litchfield. Once the Mississippi River is seen it is time to cross into Missouri at St. Louis on I-55.

Once in Missouri follow the signs to I-44. This will take you on a path to the Route 66 State Park which can be accessed at exit 266.   There the original Bridgehead Inn is located along with the now closed Merrimac Bridge. For most the must see place is the Route 66 Drive-In Theater in Carthage which still shows movies on the weekends. Once you hit Joplin, you are about to go into Kansas.

There is only 11 miles of route 66 in Kansas, but the town of Galena must be seen. For many that have seen the movie ‘Cars’, this is the town where Lightning McQueen came from and is still in that old world image of the past glory days.

On I-40 in El Reno is where the 192 mile stretch Historic Route 66 begins and it passes through the dust bowl state and where it begins and runs parallel to I-40.   In Hydro is the 1950’s style Lucille Service Station that is open for a gas stop. Next in Clinton there is the Route 66 museum which includes the classic Route 66 neon signs still operating.

In the flat panhandle of Texas there is 178 miles where the only city is now Amarillo. The towns of McLean, Shamrock and Vega, have been described as ghostly due to their low populations and lack of businesses. In Vega the famous Boot Hill Saloon and Grill can be seen and its old style building, but is it closed like most others in town.

There are 380 miles of the famous Route 66 that passes through this state, but one must go north on highway 84 just pass Santa Rosa and go west on I 25 to reach Santa Fe then on to the Turquoise Trail before arriving in Albuquerque to follow the old path. On the western side of the state, travelers will pass by Indian reservations along with Red Rock State Park and Cibola National Park.

The 401 miles in Arizona is for many the most memorable in terms of natural landscape. The old route runs parallel and still exists in section along I-40. First is the Petrified Forest State Park then Meteor Crater before entering Flagstaff. Then it is off to the world famous Grand Canyon that has both the Navajo and Hualapai Indian reservation on its border, then to Needles California.

There is 315 miles of Route 66 nearly intact in this last stretch of the highway that is clearly marked. A large portion of the highway runs parallel to I-40 thought the Mojave Desert so there is no need to worry about road side services. After the desert there is the San Gabriel Mountains before entering San Bernardino, Pasadena, and Beverly Hills before venture down Sun Set Boulevard then Santa Monica Boulevard where the beach is waiting.

Along this historic path of Route 66 there are plentiful RV parks and camp site to enjoy that are identified by road markers. Enjoy your trip back in history on Route 66.