On the North Saskatchewan River is the city of Edmonton, the capital city of Alberta, Canada and home to 1.23 million people. For outdoor enthusiasts, this is truly paradise at its finest. What this area is known for is a vast amount of trails, rivers, and other outdoor activities that are great for young and old alike. Some are family friendly and some provide a great challenge. Oddly enough, and not known by many people who come to this area, is that it has a historic background that would shock even the residents who have lived in this area their whole lives. It is speculated that inhabitants were here as early as 12,000 BC. Though that is often debated, we do know the first European was here in the late 1700s. Now, you have the opportunity to see some of the old and ancient relics or even see what modern day Edmonton has to offer. 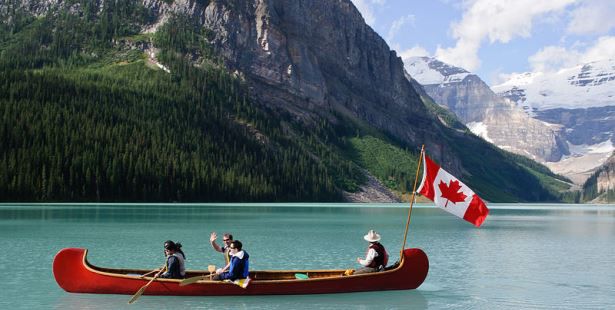 For those looking for a more modern outlook on the city, plenty of art studios are spread throughout the city. Many people line up to get inside of the famous Art Gallery of Alberta. Also, you have the Muttart Conservatory full of thousands of different plants. Of course, you can hop on over to the Royal Alberta Museum to see a glimpse of the past. However, if you are looking for adventure and want to explore the nature that our earth as provided us, you’ll be pleased to start your RV exploring here.

Most people who come to this city want to see Elk Island National Park of Canada. It is statistically proven that it has more hoofed animals per kilometer than anywhere else in the entire world! Also, the River Valley and Mill Creek in Edmonton is a great place for sport enthusiasts to enjoy the hundreds of trails that

If you want to see the mountains that Canada is famous for, you will find no better start than the 4 hour drive from Edmonton to Jasper on the Yellowhead Highway. 360kms of natural Canadian countryside to compliment the fresh air that some have truly never even experienced. Another famous drive is Edmonton to Banff using the famous David Thompson Highway.

Banff is also located in the Rockies and has the second highest elevation in Alberta. You can truly taste the thin air all the way up here! If you are into extreme sports or relaxing at the lodges, both of these places are great recreational areas for young and old alike. Strangely enough, you can also see some weird roadside attractions all the way up in the great north of Canada as well. See oddities like The world’s first UFO Landing Pad or a Ukrainian Cultural Heritage Village. All these lay alongside the North Saskatchewan River, which itself is worth the entire visit to Canada to see.

All these drives should be done with serious care in the winter time, Canada is a place known for extreme weather. Cold temperatures but very warm people. It is best to pack accordingly in your RV in case you are to break down. Temperatures can get far below freezing in the day and night!

Edmonton International Airport calls home 26km north of the city of Edmonton, which it connects easily via the Edmonton Transit System (ETS) or airport shuttle. Though it is a fair distance away from the city itself, it is an easy journey to discover all that Edmonton has to offer. Opened in 1963, it has shown no signs of stopping and has only increased the number of people going through it year after year, except for around the mid-1980s when Edmonton City Centre Airport rivaled with it. After the 1990s, a higher demand came and more had been added on when citizens voted on having jet passenger service moved to only Edmonton International Airport. The most recent expansion, complete with a hotel, was finished in 2013. Now it has flights to over 58 destinations all over the world and over 25 different airlines using it. We also offer RV rental at Calgary Airport or Calgary downtown.